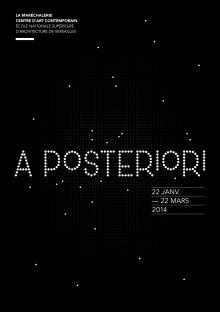 In 2014, La Maréchalerie celebrates its tenth anniversary; since 2004, more than thirty guest artists have been invited to produce and publish productions at the contemporary art centre of the Versailles National School of Architecture, a project that is unique in France.

Since its creation, La Maréchalerie has endeavoured to welcome visual artists of all generations and to bring to the public eye an experimental part of contemporary creation. While the programme has kept a continuous link with architecture, it has often been the fruit of encounters and favourites. Each artist has thus been offered the opportunity to invest a complex and meaningful exhibition space for the production of a contextual work.

This anniversary exhibition is an opportunity, a posteriori, to bring together the artists invited since 2004 in a collective event dedicated to the topicality of their creation. The exhibition thus offers a landscape of works of different sensibilities through the prism of the choices made over the last ten years. Its aim is to highlight the evolution of each artist's production since his or her exhibition at the contemporary art centre, and to find echoes between the works themselves, architecture and the contemporary world.

La Maréchalerie thus brings to light the common issues and the richness of their treatment during this historical and projective exhibition. A posteriori creates a link between the works and their creators, but also with the public, who are led throughout the exhibition to discover the artists during open meetings.

Screening of Jardins Mobiles, film in double projection, shot in the Hmong communities of Aubigny sur Nère, Cher and Javouhey, French Guiana
The side-by-side videos show the interchangeable character of nature, breaking down the idea of terroir, which proves to be an archaic myth of a land that provides for the needs of man. The so-called "roots" are imaginary to connect us to this land that we don't have enough of a life to understand what it can give us. Karine Bonneval likes the idea that people and food products circulate from one cultural area to another. How are they welcomed? Cultivated? What kitchens are they preparing tomorrow, now that the tropical is acclimatised to the temperate?

A focus on these two territories of a globalisation that is on the move and that nothing seems to stop.