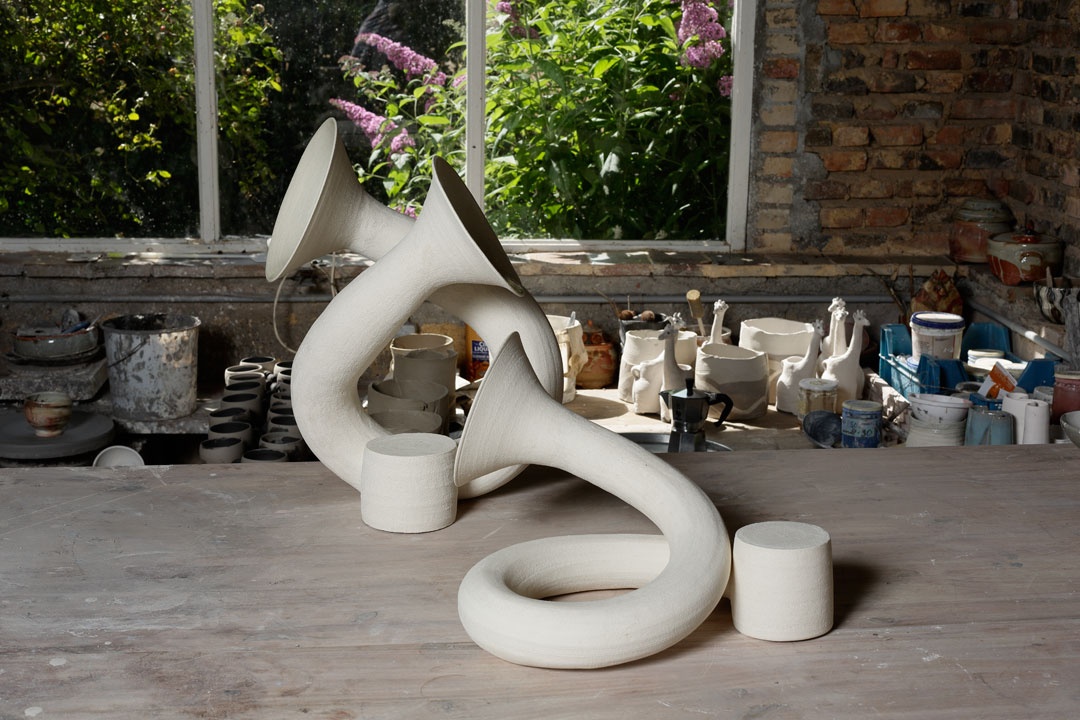 Residence restitution exhibition in collaboration with the ceramist Charlotte Poulsen, Centre de la céramique contemporaine, la Borne, from 15 October to 22 November 2016
The pieces produced in residence take part in the collective exhibition I dreamt the taste of crushed brick, curated by Sophie Auger-Grappin and Natsuko Uchino
In her projects, Karine Bonneval is interested in the experiences of man on the living but also in the way in which plant, animal or human forms constitute a repertoire of references of all times exploited by artists. Already present in some handmade popular art productions, these influences sometimes find strange coincidences of vocabulary from one place of production to another, yet without contact. Karine Bonneval is passionate about these analogies which cannot be explained, except by the fascination that nature exerts on man’s imagination.

It is undoubtedly by affinity of language that Karine Bonneval chooses to work with the ceramist Charlotte Poulsen. Since 1981, Charlotte Poulsen has been living in La Borne, where she has been shooting pieces that are gradually taking on animal forms. First of all fish, birds, they verticalize and stretch following the neck of a zebra or a giraffe. Without denying their utilitarian function of jug, pot, vase, teapot, etc., Charlotte Poulsen creates objects at all scales, as much turned, shaped as mounted on the plate. This mastery of technique, which she does not hesitate to mix without complex in the realization of the same sculpture, also leads her to use different natures of earth in order to create effects of marbling sometimes accentuated by a work of crushing of the plate. The line of the objects is curved, curved; the freedom of gesture dear to the artists of biomorphism is at the heart of the work and constitutes a determining element of the collaboration between the two artists.

In La Borne, Karine Bonneval was fascinated by the mix of identities that came to settle there and by the geographical multiplicity that composes it. The Chanson de gestes project is a sound harvest taken in the intimacy of 9 workshops, in the presence of the ceramists at work. Developed over the course of the meetings, the project was nourished by the physical work of the work being done where each artist expresses himself through his gestures towards the earth. Karine Bonneval and Charlotte Poulsen then imagined a set of sculptures that amplified this sound material by drawing on the phonic properties inherent in ceramics, using dialogue between form and orality, words and gestures.

The song of ceramics
Circular tubes rolled or upright, extended with one or more flared corolla, the pieces draw from the floral register as much as from that of wind instruments. Evoking the unique petal of the arum, of the carnivorous plant, like that of the trunk of a gramophone, the objects first of all visually challenge the visitor who approaches spontaneously and reaches out to listen. The form calls the function but it is also evocative of a wider universe. It awakens in passing our memory and our ability to marvel, like the memory of the shell that we all brought to our ears as children to listen to the sound of the sea.
In a second approach, the works reveal another intensity. They are murmurs, songs, very real languages that escape from the pavilions and powerfully activate the mechanics of the imagination. Neither wired connections, nor constructions concealing a technical control room disturb the apprehension of the parts. Autonomous, set like vases on a simple wooden plank or table, they each tell their own stories, like told phantasmagoria.
This effect is obviously obtained by the technical hybridity of the installation that Karine Bonneval often uses in her works. Notably recently, in the Dendromité project (Berlin), deploying long organic ramifications, such as a sprawling root system whose structure consists of an envelope of threads of different plant textures containing an invisible complex technical structure. The piece comes to life in contact with the visitors who activate the sound tracks taken from the environment of nineteen remarkable trees in Berlin. Through this ambivalent device, the artist offers us a unique experience, that of coming into contact with the silent world of these great subjects to which we rarely give importance.
If Karine Bonneval and Charlotte Poulsen associate a priori heterogeneous elements – here the earth, primitive material of expression, containing a high-tech material composed of a kit of wireless vibration speakers – it is certainly not to create an effect of plastic or visual anachronism. On the contrary, the project resides in the mysterious force of the non-visible, where each of the elements brought together retains its own evocative power.
Gestures and Stories
Quotes from stories and legends feed the play’s universe. Starting with this anecdote linking ceramic and sound writing. She reports that an amateur archaeologist heard the sound of the pedal and that of the electric motor of a potter’s wheel by placing on the finished vase a stylus connected by a magnetic cell (of the type used in record players) to a pair of headphones. While experience has shown that certain sound frequencies are well preserved and that in terms of support, a pottery is worth a vinyl, it is nevertheless necessary to stabilize the inscription process so that nothing moves to be able to reproduce the sound clearly in the ground.
It is thus not concretely possible to listen to the sounds coming from a production workshop of a distant era even if science fiction was able to draw inspiration from this phenomenon to construct well-crafted stories allowing to reactivate contested periods of History. The American series Xfiles projected in the legend of the bowl of Lazarus the recording in a pottery of the last words of Christ.

Without falling into archeo-accoustics, in a way, this is also what Karine Bonneval and Charlotte Poulsen try to do through the title Chansons de gestes, meaning medieval tales and poems of epics told in public squares. These fables find a symbolic echo with the stories of potters who came from all over the world to join the community of La Borne and found its multiple identity.
Here a Japanese nursery rhyme from the ceramist Machiko, a Hebrew song hummed by Maya Micenmacher-Rousseau who also came to settle in a lost hamlet near La Borne, or the herring recipe that George Sybesma, born in Holland, chose to share…

The project draws a geography of languages and gestures that are enriched and nourished in a logic of continuous interaction. Like the exchanges developed in polyculture, consisting in cultivating several plant species on the same farm, while reinjecting resources into the heart of the projects, the Chanson de gestes exhibition describes a living ecosystem at the heart of which springs the poetic spark.