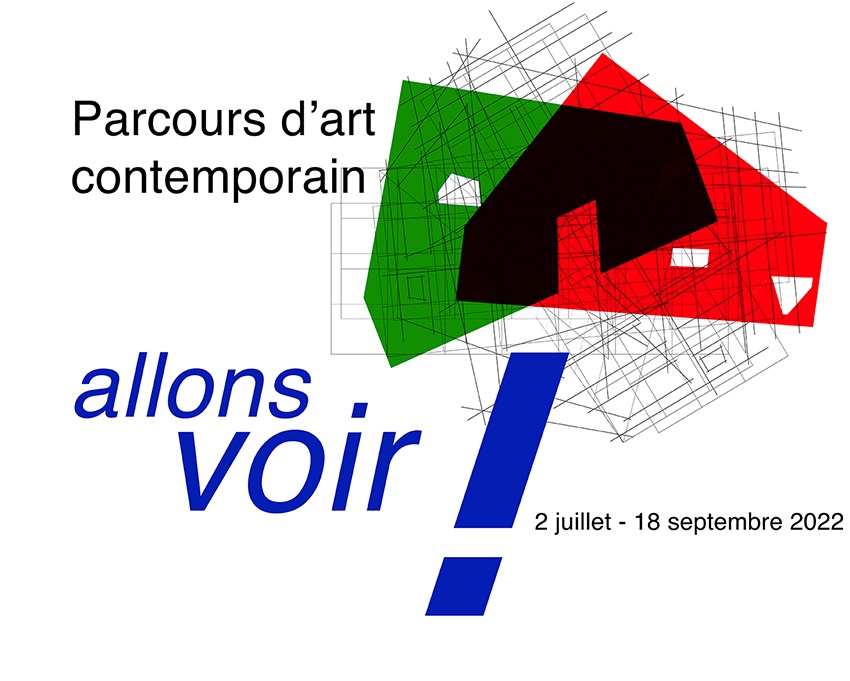 For this 4th edition, allons voir! proposes that artists, selected by Sophie Auger Grappin, intervene in and around various rural sites, farms, mills, barns (in particular the 16th century pyramidal barns that are emblematic of this region), or even silos or wash houses, in various communes of the Pays Fort: Assigny, Barlieu, Concressault, Vailly-sur-Sauldre, Le Noyer. This artistic tour allows you to discover or rediscover this micro-region region in a new light.

In the gentle valleys of the Pays Fort countryside, often located in a hamlet surrounded by groves, not far from the lapping of a river, stand centuries-old buildings that bear the collective memory of the country's history. The pyramid-shaped barns are mysterious and fascinating because they were once places of great social significance. Often shared by several families who threshed grain together and housed their livestock, they gathered there on Midsummer's Day or during a wedding banquet to play music, sing, dance and share the high points of popular life. Not far from these high places of oral memory, the washhouses were also lively and noisy meeting places, almost festive, where the inhabitants, surrounded by their young children, regularly gathered to do the washing.
If these spaces were governed by community work, often collective, they were just as important for the social relations that took place there, for the times of celebration that took place there, where words and gestures, and unconscious or 'insus' knowledge were exchanged. Noce de Campagne, borrows its name from the song written in 1964 by Marie Laforêt describing with emotion the tender memory of the celebration of a peasant wedding happily crossing the countryside followed by children. She is then the moving witness of a world in deep mutation, transformed by the industrial revolution, the motorization and the reparcelling of the modern era. Crossing peasant and agricultural sites from different eras to the present day, the new Allons-voir route proposes to survey this countryside through sculptures and artistic installations revealing, through the appropriation of a story, a gesture or a practice, a part of this forgotten oral and popular heritage.
Thus, the artist Delphine Ciavaldini, touched by the intimate interior of the Grange du Joliveau, has chosen to deploy a work composed of dried plants such as hay, hemp and twine braided and sewn together to build a double shelter in the barn. A veritable shaggy plant architecture that suggests that it may have been the scene of vanished gatherings.
Adept at discrete practices such as embroidery, garden cultivation, drawing and modelling, Marjolaine Turpin has recently begun to make glass pieces. She chose the wash houses of Le Noyer and Concressault, marked by the toil of the washerwomen seeking the whiteness and softness of the cloths. She designed a set of glass planters suspended or floating on the surface of the water like gardens for growing the plants used during the washing. Permanently moistened by cotton ties connected to the basin, these capsules reverse the process by turning the linen and water into growing agents for soap plants.
In the hamlet of Moulin Riche in Concressault, Karine Bonneval, in collaboration with the potter Charlotte Poulsen, presents an original sculpture of ceramic fountains of youth that allow the tasting of birch sap. Based on the hypothesis that the pyramidal barns date back to the Vikings' passage along the Loire, Karine Bonneval has developed a work based on the birch tree, which this people particularly exploited for its multiple virtues. The work Berkanan is the first part of a larger research project devoted to this study of the birch tree, carried out in collaboration with the scientist Nicolas Visez of the Lasire de Villeneuve d'Ascq. In the pyramid-shaped barn in Vailly-sur-Sauldre, Karine Bonneval also presents a piece from 2017, also designed in collaboration with Charlotte Poulsen. Listening to the soil gives us a rich and complex interpretation of the ground we walk on. Interested in the invisible dialogues with the living around us, she imagines different ceramics in the form of fungis, modelled and sounded from the captures made ofthe living activity of the soil.
In Vailly-sur-Sauldre, Vladimir Skoda's spherical work faces the pyramidal barn. The large spherical outer room faces the pyramid, like the initial geometrical forms of a landscape-scale building set.
Two young artists, graduates of Ensa Bourges, are joining the allons-voir! edition this year. Familiar with rural life and hunting practices, Léa Devenelle is developing a sculptural and performative work that takes a sometimes amused and above all committed look at ambivalent relationship that man has with the wild animal, more commonly identified as the game of the countryside.
Disturbing our perceptions and apprehension of spaces, Paul Ricci uses drawing and the technique of architectural trompe l'oeil to disrupt our approach to heritage.
Finally, on the recent site of the Badineau silos in Barlieu, this year will see the creation of a monumental and perennial polychrome work of art, "Polyrythmie", by Claude Pasquer, which will be inaugurated in September.The artist, a follower of a pictorial thought process specific to the combinatory principles of concrete art, has imagined chromatic sequences on the cylinders of the silos, orchestrating the diffraction of chromatic sequences orchestrating the luminous diffraction of the six colours of the rainbow.

Appropriating stories, images, gestures and collective rituals, but also inventing unsuspected narrativities, the artists are not "object makers". On the contrary, they seek to position themselves on the side of the creative activity of the human being in the idea of escaping categorisation and conformism and inventing another aesthetic dimension of the world.