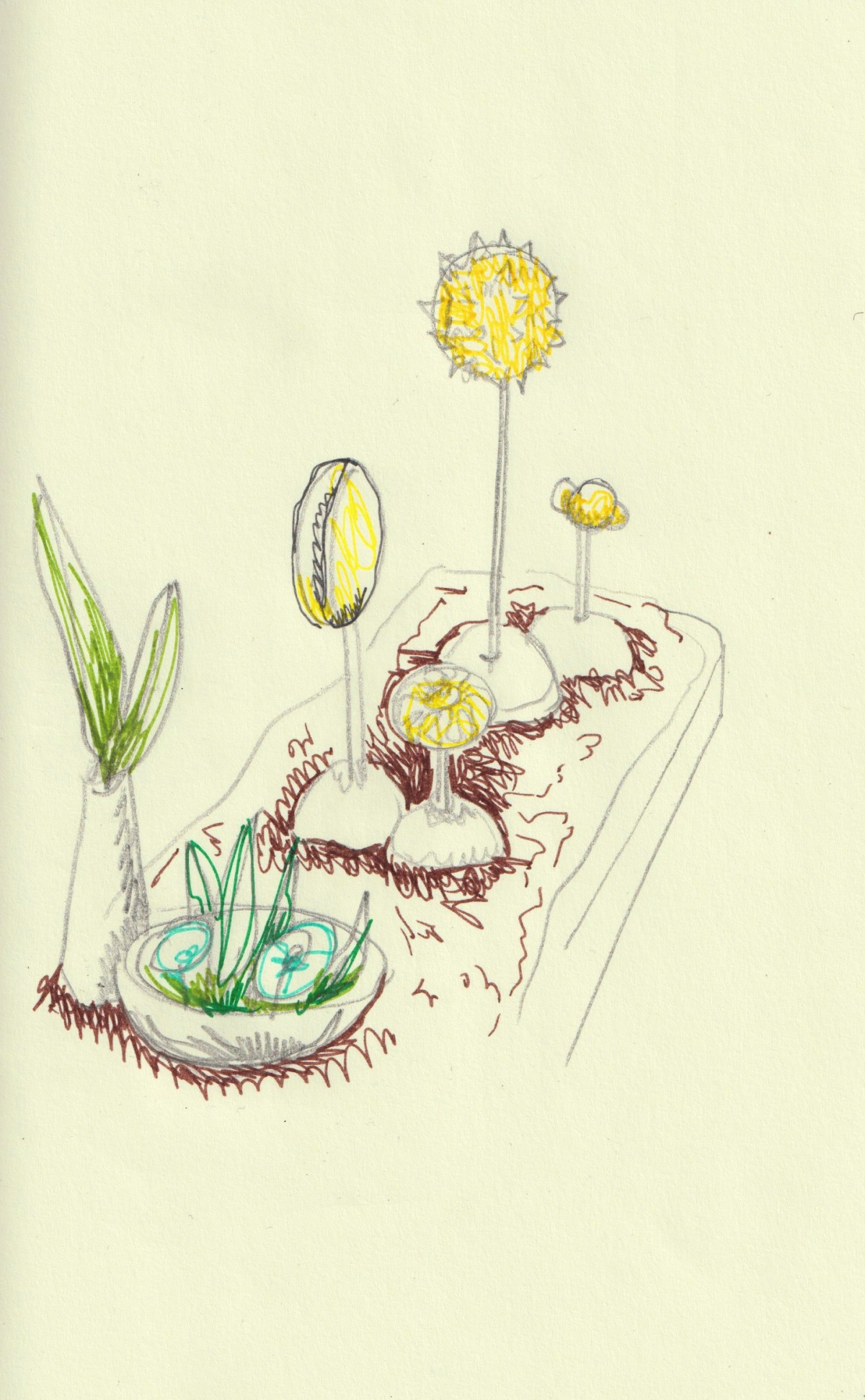 A workshop for a culinary tasting, in collaboration with Claudine Boyer, ethnobotanist

"Emanuele Coccia considers food as an interspecific political fact where bodies constantly migrate towards others, thus highlighting the fact that no species can limit itself to its own body." Thiphaine Calmette, le goût d'apprendre, Libératon

Pollen is the most ingenious of structures, an element of precise and complex architecture, whose evolution has allowed for a wealth of sophistication. Trees and plants deceive their immobility by these tiny travelling grains, holding their genes in the making. Whether they are carried by the wind, insects or other animals, they are the result of very fine and specific coevolutions.
Humans have been sharing the same air with these pollens since they first came to earth, but the anthropogenic force we exert on our common environment has broken the fine balance. With the sudden disappearance of a large number of pollinators, the travels and natural migrations of these pollens are in danger, while at the same time anemophilous pollens (carried by the wind) are becoming powerful allergens for humans with pollution.

For Baptiste Morizot, "The systemic ecological crisis that we are experiencing is also a crisis of sensitivity to living things. By this I mean the impoverishment of words, of the ability to perceive, of emotions and of the relationships that we can weave with the living world (....). (The joy that) is really lacking, and that interests me, is the joy at the idea of the existence of the living. And the joy of being part of it.
This affect must be invented from almost nothing in our culture. Because moderns are not aware that they are living, and when they know it, they experience it more as a downgrade than as an honour. To be alive, to be of this world, to share with other living people a community of destiny and mutual vulnerability, is not part of our cultural conception of ourselves.

To "be", with the group of students and teachers Delphine Soldermann and Emmanuel Coulombs, we set out to learn more about this plant element, but also about the wild edible and toxic plants that live in the area, thanks to the knowledge of Claudine Boyer, ethnobotanist. We collected plants that became the basis of our pollen cakes.
The material and immaterial learning achieved during the week was enhanced by a visit to the CIAP and an exploration of its natural sites.

By experimenting, picking and crushing materials, the aim is to create, for the last day of the workshop, culinary preparations in the form of giant pollens, which each guest will be able to "pick" and taste.
A table becomes our territory, landscaped with vegetable earth and modelling clay, to receive the suspended pollens, the wild plants to be tasted.

An invitation to new poetic and concrete migrations.